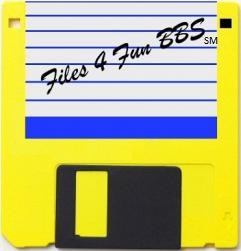 Files 4 Fun BBS (F4FBBS) started out originally as a Bulletin Board System (BBS) way back in 1992. F4FBBS made waves among the BBS' by providing fun for the entire family. We hosted images, games, forums; to mention a few.
Our games were inter-BBS as well which provided our users a multitude of interaction with players from around the world.

After a few years, some of our adult users asked if we were going to provide "that" style of entertainment. After MUCH debate and thought, we decided to delve into that realm but wanted to figure out a way to keep things safe as well as secure. We were amongst the first BBS in our area to provide a means of having users provide proof of being 18+ years. At that time, there were no means for taking credit cards or other items via the Internet as it (the Internet) had not really become the main-stay of global communications yet.

After a few more years, the Internet decided to happen. This caused a LOT of BBS'ers headaches and sorrow to see so many Bulletin Boards going offline as the cost to run them became not-so-worth-it.

F4FBBS ran on SPITFIRE software by Buffalo Creek Software. This particular software was DOS-based. Prior to the Internet taking off as big as it did, Windows from Microsoft became the main OS (Operating System) that a lot of home users and many businesses started using on their computer systems. SPITFIRE creator had decided not to make changes to his software for Windows or Internet ease-of-use. F4FBBS still ran the BBS from a home-based computer system and always stayed FREE to any user of the system. Some users did make donations which helped pay for the phone bill, and those users were provided more resources and extra time on the BBS to play games and use the File systems.

The system stayed online until the late 90's and is still around today. Although, not open to the public, some games are still being played as they were such a blast for those of us that loved to play them.

The above were my most favorite two games that I played on a daily basis.

- TradeWARS 2002 was another that a friend and I loved to play together as well.

NEW STARTING 2018:
I have been playing around with some software to allow me to bring the old BBS back online without having to use Dialup modems. I won’t post the direct link here, due to all the port attacks I was having initially, so shoot me an email and I’ll send you the link!